HOW WILL THE SMART FARM OF THE FUTURE LOOK LIKE?

Back to the future…of Smart Farming.

This is an article about predicting the future. Many of you perhaps remember the movie “Back to the future” which “predicted” a lot of technology that didn’t exist in the 80s, but is available today like fingerprint readers, smartphones, smartwatches, and so on…

But first we have to see a couple of “predictions” for our future that involves great challenges:

The challenge is not small at all, to make it more interesting we have to add that most of the land we can work is already being cultivated. The rest is atop mountains, covered by desert sands, in other words can’t be cultivated. The only potential farmland left would require slashing and burning the world’s remaining rainforests. That means we’re going to have to make some large-scale changes to how we farm.

That would mean a revolution in farming so let’s review an agricultural revolution, there is a guy called Norman Borlaug, who went to Mexico in 1944 and  bred several high-yield, disease-resistant strains of semi-dwarf wheat, and added fertilizer to the mix. By 1963, Mexico’s wheat yields sextupled. Then he went to South Asia and basically did it again, doubling the production of cereals in India and Pakistan.

Borlaug won the Nobel Peace Prize in 1970, and the trick was spreaded and that’s basically how the world grows food nowadays. So far so good; although, there are many considerations like rotation of crops, or the use of chemical fertilizers, which requires good practices or the result could be more harm than good.

Some Developments and Trends in Agriculture

There have been many other interesting innovations, like when the Israelis came with micro-irrigation, then hydroponics and green houses in Almeria, Spain, then aquaponics, and aeroponics, sometimes in “vertical farms” concept developed in Columbia University, which like the others include a roof and walls around the crop that takes away most problems caused by weeds, pests, and adverse weather.

Is not possible everywhere of course, this kind of projects are being developed where the land is very expensive, importing the food is too expensive, or the food security of the nation shall be preserved, these cases makes the model profitable in Europe, USA or Japan. Oh and there is the pink houses that grow crops without solar light but LED illumination on red and blue colors only.

We’re not subject to rain or drought. We control the environment. So the weather is perfect every single day.
-Robert Colangelo 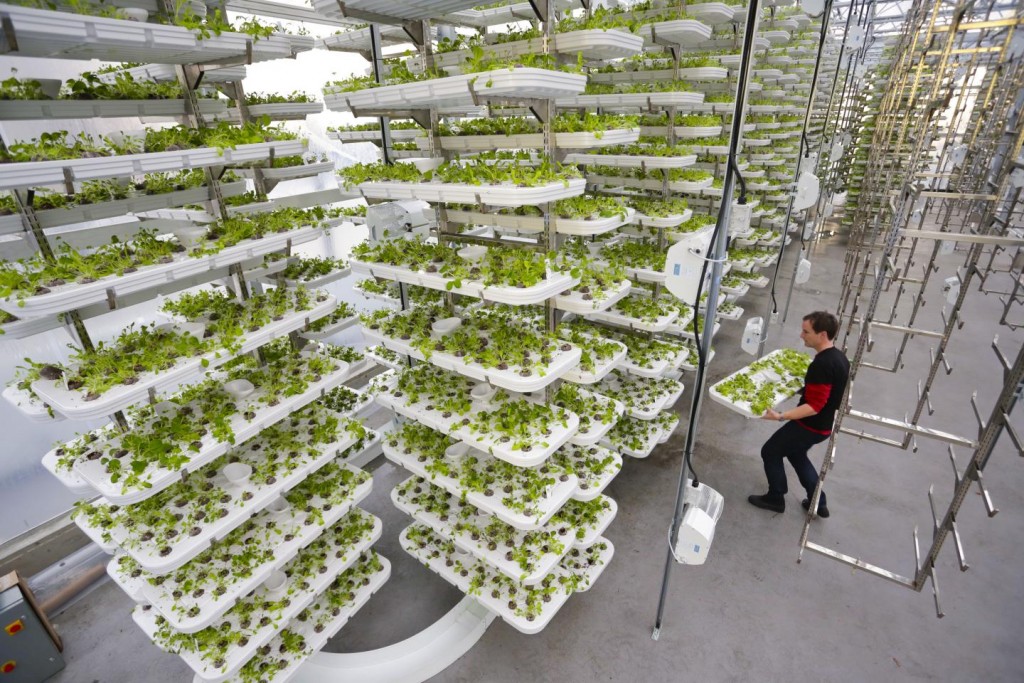 But so far we’ve been talking about hardware, after reading a lot of sources to make this article, we have to highlight “connectivity and maths” as driver forces in the evolution of the smart farm of the future, so let’s talk a little about connectivity, with this we mean the network, with terminals that pick up data, whether is collected by last generation of sensors in a drone flying over the farm, or is info being fed manually by a person on a system. Here comes the math, that process the data so we can have information, statistics, unveil patterns, and “predict” with great accuracy how much would yield our next crop.

We’ve been writing for some time about driverless tractors, and agricultural drones. Now, for noted futurist Jim Carroll plants might someday be able to analyze themselves, with embedded computer chips for an instance; he says, in fact, connectivity is a concept that will drive agricultural advancements as the next generation moves in. “Do your plants need a nitrogen boost or a drink of water? They’ll send alerts directly to your computer”.

First, let’s mention the FP7, or Seventh Framework Programme for Research and Technological Development, which is an initiative to address Europe’s need in terms of jobs and competitiveness, and maintain leadership in the global knowledge economy. Under this program the general objective of PLF is to bring some automated tools for monitoring of the animals, which will allow to follow animal welfare, animal health, productivity and environmental impact, recent findings suggest that incidence of some diseases can be “predicted” from PLF tools.

What is Smart Farming?

Smart Farming is the use of data in farming, one example is soil sampling, to measure qualities such as mineral content and porosity, that can predict the fertility of different parts of a field. Accurate contour mapping helps indicate how water moves around.

Another example is that with all this info, the density of plants grown can be tailored to local conditions, and under precise control. John Deere’s equipment can plant seeds to within an accuracy of 3cm. And when a crop is harvested, the rate at which grains or beans flow into the harvester’s tank can be measured with great accuracy.

That information, combined with GPS data, creates a yield map that shows which bits of land were more or less productive, and this information can then be fed into the following season’s planting pattern.

That raise also a number of concerns about the role of giant companies such as DuPont, John Deere and Monsanto: for example, data ownership. Who is the owner of soil sensing data? Monsanto or the farmer? And if it is Monsanto (or another company), what does it do with that? One answer could be price discrimination: data on the soil or on the water could be used by biotech giants to charge farmers a different amount for the same product or service.

As Craig Ratajczyk, Illinois Soybean Association CEO says: “Thirty years from now, farming won’t look anything like it does today.”

So, the question we want to leave for you this week is this:

According to your predictions, what would be the tasks the children of today will be doing in the farms in 25 years from now?

If you liked this article don’t keep it just for yourself, please share it with your friends on Facebook