Corn, milk, meat…energy. Will energy become the next product of farming..?

In this week’s article we wanted to review three examples on energy cogeneration from waste: a big supermarket in England, a 200 cows farm in Minnesota, and a single rural house in Spain. 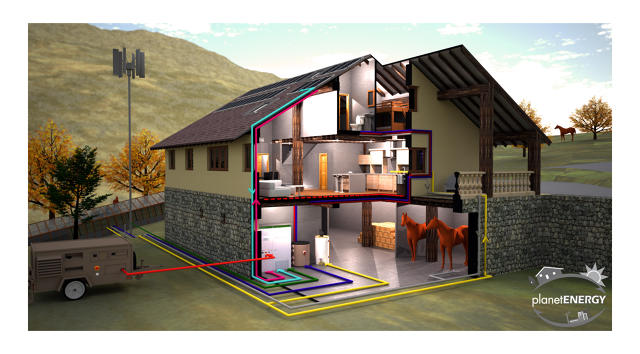 proptotype of cogeneration in a rural house in Spain

So, first the biggest guy, the supermarket, according to FastCoexist website, the average supermarket in the U.K. throws out around $2,300 of food every day, but Sainsbury’s is trying a different approach: everything that can’t be donated to a food bank or similar is turned into energy generation. First they are saving the cost of sending food waste into the landfill at £150 per ton, the cost of converting this waste into energy is lower, less contaminant, and the same truck that delivers food to each store take the waste on their way out, delivering the waste to biogas plants where is turned into electricity, with one of the stores running 100% on this “green” electricity.

Sainsbury’s already has two carbon neutral stores that run on biogas from local farms and started adding solar panels to store roofs in 2014. The company is considering using biogas to power other retail locations, either from food waste or different organic waste, which is they are looking for: low carbon energy generation.

Now, there is a farm in Minnesota with just 200 cows that produces 1,100 gallons of milk per day, but also 3,000 gallons of manure daily, the farm is piping the manure to a silo where is heated, the bacteria produces the methane, then flows down a pipe to a Chevy 350 engine which powers a 37 Kilowatt generator, half of the power is actually goes back into the process of making methane, but the other half is bought from a local power company, and the owner expect to get 400 USD monthly for the energy he puts on the grid.

“1,000 dairy cows make the energy equivalent of about nine barrels of oil a day.”
Also in Minnesota another manure digester is running in a dairy farm, and the owner, Dennis Haubenschild states that “Maybe not every dairy would operate the digester on their own, but I could see co-ops or something putting in digesters and supplying renewable energy for our communities. It’s part of being sustainable.”

There’s another advantage for farmers who make methane powered energy on their farms according to Dennis: Because the methane from his cow’s manure is being turned into electricity instead of sent into the atmosphere, he can trade carbon credits on the Chicago Climate Exchange. Right now that’s a way for Dennis to make another $360 a week.

So far, the dear reader can think we are only talking about fancy farms in Northamerica or Europe, and that this is impossible for developing countries, but is interesting that is being implemented in countries like Mexico where a farm called “La Estrella” is using the manure of 700 cows, which is about 25 Tons per day, produces 400 cubic meters of biogas, with 62% of methane (CH4) and 23% of carbon dioxide (CO2) out of the savings in electricity. Since beginning operation, to November 2010 this farm saved emissions for more than 16 millions of cubic meters greenhouse gases, and more than 7.000 carbon certificates, and there is plenty of examples in the sugar industry in Latinamerica.

A single house powered by…the toilets?
Perhaps some of you remember a japanese animated movie of 2004 called “Howl’s moving Castle” about a good wizard that lives in walking castle powered by a little flame-like magical creature called “Calcifer”…ahem, let’s go back to our examples… At this point the function of the system is more or less explained, finally we wanted to mention something that can be very interesting for some small farms or single houses in rural areas, like this one in rural Spain that will run on the organic waste from the toilets, kitchen scraps, and from horse manure on the farm – and converts it into energy that can provide hot water, heat, and gas for cooking proving that the same energy generation technology that works for a big chain of supermarkets can work for a single house.

“This is a demonstration facility to show people that it’s technologically and economically viable on a small scale,” says Meghan Sapp, one of the co-founders of a start-up called PlanetEnergy.

If this kind of generation and cogeneration becomes mainstream, it is possible that in few decades the main generation of power to cities comes not from the hydroelectrical or nuclear plants, but from the farms, and this electricity generation would be just another source of income for the farms just like tomatoes, or milk, or meat…who knows?

We want to hear your thoughts. Join the conversation on Facebook.