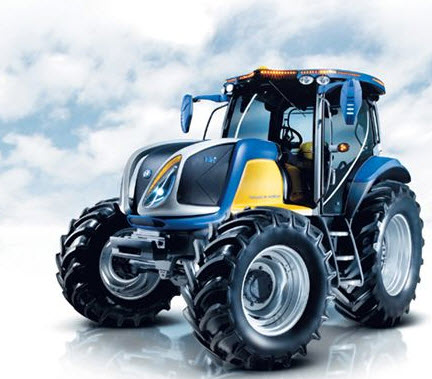 New Holland, for example, introduced their ground breaking hydrogen powered model, NH², sporting a full 106 hp. at the 2011 U.N. meeting in Durban, South Africa. New Holland uses the term “energy independent farm” for their alternative fuel tractors because of the potential for bio-fuels to power tractors that help grow…bio-fuels.

Running a full-size, 100+ hp tractor off of hydrogen had never been attempted before New Holland achieved the feat.

Not only does the NH² run virtually silently according to their advertising, but it also emits only water and oxygen as by products. This clean exhaust is a stark contrast to the black smoke that an out of tune, older diesel tractor produces.

Old Tractors Can Run On New Fuels
Even switching a standard diesel tractor from diesel to bio-diesel can have substantial benefits. Though the price difference between petrol-diesel and bio-diesel is not favorable for the more expensive bio-fuels, the longevity of a bio-diesel fueled engine can help offset the increased operating costs. The higher viscosity and lubricity of bio-diesel reduces both maintenance and required rebuilds for engines, based on improved lubricity over low sulfur diesel.

Deutz is another well known tractor manufacturer offering alternative fuel tractors. It is one of the old-line German tractor manufacturers known for their reliable and fuel-efficient diesel tractors. Deutz detected as early as 2007 that there was a market for a bio-fuel ready tractor. They responded by offering a model that could run off of unprocessed vegetable oil, direct from the soy, corn, or canola press. This gave farmers the option to use a portion of their crop for powering their farm tractors without having to set-up a precision bio-diesel processing system.

Tractors Have Run On Almost Every Fuel
Farmers have been running their tractors on a variety of fuels ever since the gasoline powered tractor came of age in 1892 (invented by John Froelich of Iowa). Before the gasoline tractor, tractors were steam powered. Throughout the development of tractor technology, they have run on diesel, kerosene, oil distillates, gasoline, vegetable oil (exactly as Rudolph Diesel intended), LNG (liquified natural gas), CNG (compressed natural gas), and even propane.

Any farmer growing crops that produce oil, might consider running their tractors off of bio-diesel. Corn, soy, canola, or peanuts all offer a farmer the potential for producing their own fuel for their tractor. Of course, if you want the latest tractor technology, then the new breed of hydrogen powered tractors might be for you. Or you could choose to turn to a new fuel for the standard diesel tractor, by running it with bio-diesel. Either way, you will be part of the new trend in alternative fuel tractors.

May, 2013 added a new chapter in the rice breeding programs of Africa with the launch of five varieties... read more

At TractorExport, we are pleased to report that our African sales and operations have increased dramatically over the past two...