Most-read books on Sustainable Farming and the Food Revolution

What would you do if the varieties of peaches you (and your parents before you) grow, are no longer in demand? 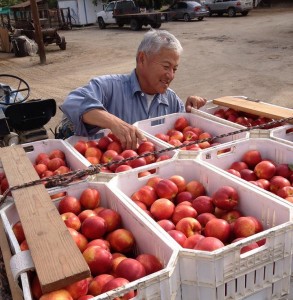 That’s what happened to David Mas Masumoto in 1987, when his farm came to a crossroad.  He found that the large volume buyers no longer wanted his Sun Crest peaches.  “An heirloom variety just didn’t have the right cosmetics for the market place…it didn’t get red lipstick-red when it was ripe” recalls Masumoto on an interview for NPR.

The Sun Crest peach then became blacklisted and Masumoto found himself with 2,000 boxes in cold storage with no buyers. Demand was weak and he had to face a tough decision as to whether or not to remove all the trees he had grown for years.  He scheduled a bulldozer and wrote an essay for Los Angeles Times, “Epitaph for a Peach” which was published by the newspaper.  Referencing the following excerpt from there:

“I knew that I would never make a fortune in farming but I hoped that I could be rich in other ways, and maybe, just maybe, my work would create some other kind of wealth in the process…

…My orchard will yield to the bulldozer and the trees will tumble without a fight. We will set a match to them and listen to the crackling of dry leaves and dead branches engulfed by the rising flames…”

But when the bulldozer showed up Masumoto changed his mind, and decided to preserve the trees. He also started farming organically, which proved timely as the Organic and Sustainable Food Revolution was beginning to explode.  His so called “outdated” peach found a home in the marketplace…

He started to get letters from the newspaper encouraging him to keep his peaches, which created a sense of ambivalence between risking his farm’s future, deeply entrenched in family history.  His father bought the farm in internment camp during World War II, and where decades later he peacefully passed away surrounded by his son and family, and a successful farm at the time as his legacy.

So Masumoto got in touch with Farmers’ and Specialty Markets in places like San Francisco and Berkeley — places that are far away from the big farm operations of the Central Valley.  One thing led to the other until he met the chef and food activist Alice Waters who heard about his mission to preserve his family’s heritage and its peaches,  and she decided to taste them first hand.

Alice started serving those peaches at her restaurant, Chez Panisse, in Berkeley, and made Masumoto’s story its centrepiece, telling the story of the farmer who saved his heirloom orchard. “I have always wanted to support the people who are taking care of the land, and it’s that personal story that connects the food to the people who come and eat here,” she says.

…and that’s the beginning of the story about how this farm went from calling the bulldozers and following the industry status quo, and ended up becoming a landmark in the local-food movement and farm-to-table marketing stream.  The legacy lives on.

This article is based on an NPR Podcast

40 years ago, then the Secretary of Agriculture Earl Butz of the Nixon Administration  said “get big or get out”. The book “Lentil Underground” tells the story of David Oien, a small farmer on a 280-acre patch of land in rural Montana, who dared to forge a path away from conventional, ‘Big-Ag’, by planting what others considered weeds.  A fascinating story from Montana and the ongoing rural renaissance.

Today, David Oien leads a thriving movement of organic farmers who turned away from “conventional agriculture” to become renegades in their own communities, and work sustainable farming with heirloom seeds and biologically diverse farm systems. Under the brand Timeless Natural Food, this “lentil underground” has grown into a million dollar enterprise that sells to hundreds of independent natural foods stores, and a host of renowned restaurants.