In the day-to-day operations on farms and construction sites, just about the last thing on your mind as an operator is how clean your fuel is as it powers your tractor and equipment.  Over time, however, not paying attention to keeping clean fuel clean can cost you big money.  Diesel fuel is actually very clean when it leaves the refinery.  What happens after that, however, can be significant.  During transport, contaminants can be easily picked up in diesel fuel.  Whether pipelines, at the terminal, in delivery trucks, in storage tanks, and in the saddle tank taking it to the field.  With each step of handling and storage, diesel can begin the degradation process before it even goes into the tank, much less the injector.

The expense of fuel system components, downtime, and costly disposing of dirty fuel is most definitely worth putting knowledge into your everyday machinery operation on the farm.  With new pollution-driven technology in diesel engines, and the costs of fuel today, it’s never been more important.  For example, prior to 2010 particulates of 10 microns and larger needed to be removed from diesel fuel for proper operation of engines that must meet ISO (International Standards Organization) code for cleanliness.  Today, that is reduced to 3-4 microns.  While in North America, the fuel may be the cleanest in the world, much of the fuel coming out of storage tanks on farms and over the road do not meet that specification…now transport that to developing countries across the equatorial belt, and a whole new can of worms is opened.

Prevention is the Best Cure

Water is the Enemy – of all the contaminants that can ruin diesel engines, water is most often cited by industry experts and mechanics alike.  Diesel Fuel has very important lubricating qualities in the engine.  Without lubrication from the fuel, injectors can seize and engines can fail.  Water boils and vaporizes at a lower temperature than that of fuel.  When introduced into an injector, water’s expansion at high heat will damage the injector.  Water in fuel also results in rust, corrosion, wear, and damage; and degrades the quality of the fuel immensely.

Water is common in any tank, from the tractor to the bulk tank due to condensation.  Something as simple as a loose or missing fuel cap introduces moisture into the system, greatly increasing the level of condensation in the tank.  In bulk storage, as tanks empty, they will take on air, humidity, and ultimately, water.

The focus should not just be in reducing water, but ELIMINATING it to protect your equipment.

Microorganisms – yes, there are microbes that live in, and can actually thrive in diesel fuel.  With a greater use of biodiesel, these living bacteria will continue to become a problem in tanks and systems.  They ultimately lead to corrosion and breakdown if left unchecked.  Biodiesel has the potential to carry more water, and in this water, these microbes can explode in population.  Technology is attempting to stay ahead of these challenges.  For example, Luber-Finer now manufactures a triple layered filter that claims it removes 95% of water in biodiesel. 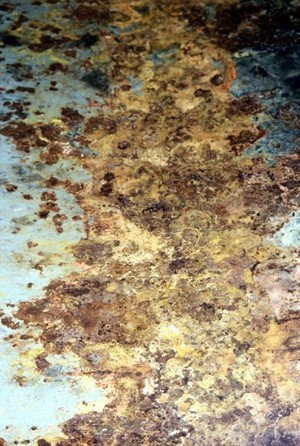 “The presence of bacteria and fungi in conjunction with water in fuel causes corrosion to develop in storage tanks. Along with water, rust, dirt and bacteria settle to the bottom of the tank and ultimately can penetrate tank walls”
Source: TruckingInfo.com – Fuel Smarts – Keep it Clean and Dry

Particulates – a well maintained filter regimen should prevent damaging particulates from entering your engine, but care must be taken to prevent them from entering the tank to begin with.  They will settle to the bottom of the tank, and come up into the system during operation, causing filters to plug and not function properly.  The smallest particulates can enter the solution and over a short period of time, cause filter breakdown and other component problems.

Additives and Water – The benefits of fuel additives can actually be detrimental to systems when water and other contaminants are present.  Chemical reactions, complicated by biological activities, can cause fuel additives to become unstable, falling out of solution with the diesel.

Diesel fuel is a carbon-based petrochemical.  The moment fuel leaves the refinery, it begins to degrade via oxidization.  The sediments and gums that clog fuel are the primary by-product of this degradation.  Without additives to inhibit this process, diesel can go bad in as little as 30 days.

Clogged Fuel Filters are usually the first symptom of a problem.  There are many causes, and oftentimes critical consequences.  For example, using untreated summer fuel in cold weather without treatment causes paraffin and wax, each components in diesel fuel, to crystallize in the fuel.  This is easily rectified by switching to winter grade fuel or using an additive which lowers the fuel pour point and improves cold flow properties.  When clogging is a problem, replace the filter as some of these causal issues could persist and continue due to residue trapped in the filter. 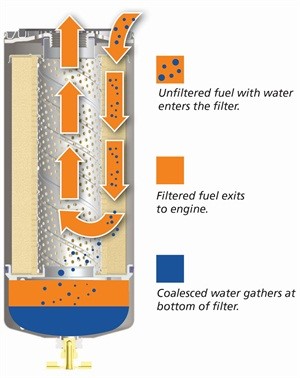 Modern fuel filters are engineered with one primary purpose…separating water. The increased specifications for reduced particulate requirements relating to emissions has opened a whole new requirement for fuel to be cleaner.
Water separation is a key function of modern fuel filters.
Source: TruckingInfo.com – Fuel Smarts – Keep it Clean and Dry

Filter plugging is not limited to temperature.  Excessive microbial populations in the fuel, and ultimately, the bio-degradation of the fuel can wreck havoc on filters.  Picture milk turning to cottage cheese and you get the idea.  One solution relates to the use of Biocides in the fuel, but this isn’t always the only answer.  If populations are so high, the concentration of biocide is not enough to penetrate their fruiting bodies, protective surfaces, and colonization sites; so they only provide a short term solution.  It’s also important to understand that it is not the microbes themselves, but their by-products which contribute to clogging fuel systems.  They float in the fuel, stick to surfaces from top to bottom, and hence just treating the fuel with a biocide may not be enough.

In fact, quite often, the use of a biocide can aggravate the problem, turning biofilms into solids, with obvious consequences in the filter.  Organic materials end up as grit, float to the bottom of the tank, and at each refueling, can make their way into the fuel line.

Ultimately, it goes back to WATER….without water, the microbes don’t grow. 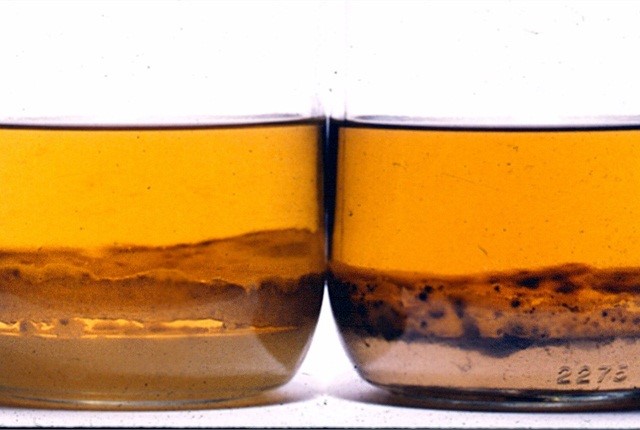 The presence of water or other fluid mixed with diesel fuel is clearly apparent from the stratification shown here. Source: TruckingInfo.com – Fuel Smarts – Keep it Clean and Dry. 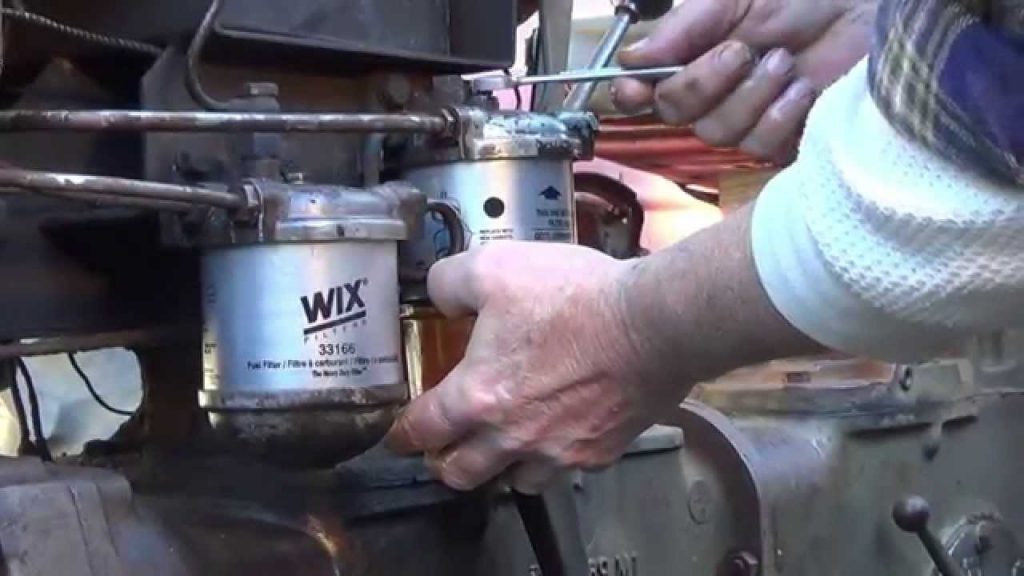 Monitoring your fuel quality and changing the filter when necessary will save you expensive problems later…no matter how old your tractor is. Source: Video: Changing a fuel filter in a Massey 35 tractor

DieselFuels.com – Most Diesel Engine Failures Originate in the Fuel Tank

Bell Performance:  Water in Diesel Fuel – 7 must knows for getting rid of it

Track vs Wheels for Loaders and Equipment

The debate between skid-steer track vs tires has been ongoing for years, whether in loaders, tractors, or any piece of...