Organic Agriculture – Is it Really the Answer? What’s the Question?

Having been educated in Agriculture, with a particular focus on Agronomy, I’ve been particularly interested in the ‘Organic’ trend sweeping the politics, economy, and agricultural industry today.  Consumer perceptions of Organic Agriculture as being something ‘new’ to farmers is particularly unsettling to me, and I’m sure, to many of us who have either farmed it or worked with farmers over the years.

I thought I’d write about this topic today, so I did my usual search of the internet for articles which I felt had the least amount of ‘bias’, and I have to confess that the search took more time than the actual writing of this submission.  Similarly, as I visit with newcomers in Agriculture who want to be engaged specifically in ‘Organic’ Agriculture, and we talk about this or that while looking at a plot or a field, in the back of my mind, I hear a little voice saying “if only they took Soil Science 101”.

My favorite story about the ‘Organic’ movement I tell people is when my son Matthew and I were in the barnyard and a Volvo full of kids and moms seemed to race in the driveway to pick strawberries.  Down comes the window, and the one mom says, “Are you Organic?”  Being a rather sweaty, trying day,  my shirt all dirty from working under a piece of broken equipment, I rolled up my sleeve, pinched my arm, and said, “Last time I checked”.

The point of all this is that ultimately, ALL farmers (who harvest from the soil), practice Organic Agriculture.  Organic matter, carbon content, green manure, cover crops, crop rotation…all terms that have been around for a very long time and go into just about every agronomic decision a farmer makes.   The consumer wants to feel their food is safe, and they have bought into the premise that Certified Organic Food is safest because it is produced in the absence of chemically based,  highly concentrated fertilizers and without chemically based crop protectants (pesticides).  The arguments abound among food and agricultural scientists;  and farmers as well,  as to the basis and validity of ‘Certified Organic’…at this writing however, the market believes it, and the system will produce it..one way or another.

So I took a journey today to find some articles that I’d like people to consider reading which I think can help sort some of this out. 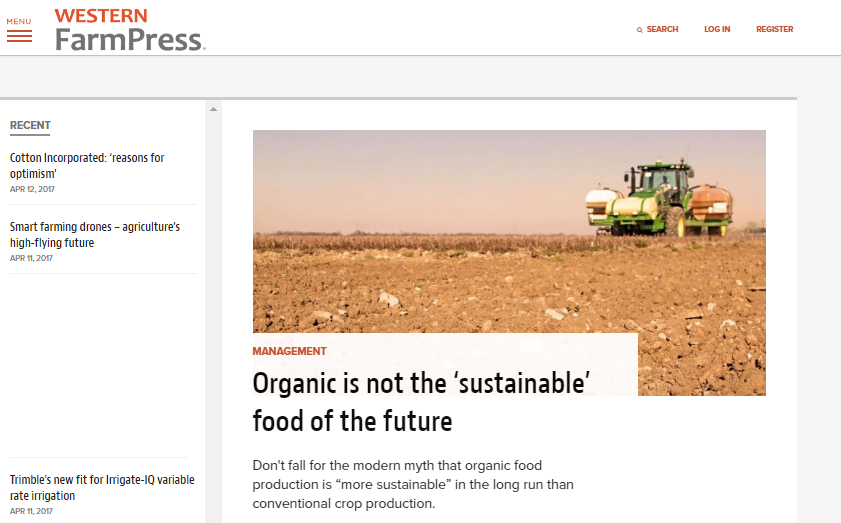 Organic is not the sustainable food of the future. Source: Western Farm Press

This article was written in 2014 and outlines several points that are important to understand regarding why just calling your farm ‘Organic’ doesn’t mean you are necessarily contributing to  ‘Sustainability’.  Issues like soil erosion and nutrient leaching and runoff are discussed, as is the need to understand the economic fraction of ‘sustainability’, among other things.  Granted, Mr Cornett writes for, to, and about large scale Agriculture; but he makes valid points in his article.

One excerpt that I relate to people often (usually playing ‘devil’s advocate’) because being schooled in Agronomy and at least minimally familiar with the science of it all, I thought I’d highlight:

[The article titled “Nitrate leaching from intensive organic farms to groundwater” was written by a handful of soil scientists and appeared in Hydrology and Earth System Sciences. It highlighted this specific finding: “Surprisingly, intensive organic agriculture relying on solid organic matter, such as composted manure that is implemented in the soil prior to planting as the sole fertilizer, resulted in significant down-leaching of nitrate through the vadose zone to the groundwater.” (The vadose zone is the part of earth between the land surface and the position at which the groundwater is at atmospheric pressure.) Elevated nitrate levels in groundwater are hardly a mark of “sustainability.”]

This article is very interesting as it takes the Organic Agriculture discussion to a world view.  I’ll cite the opening introduction and let you click on to read more:

[The only people who think organic farming can feed the world are delusional hippies, hysterical moms, and self-righteous organic farmers. Right?

Actually, no. A fair number of agribusiness executives, agricultural and ecological scientists, and international agriculture experts believe that a large-scale shift to organic farming would not only increase the world’s food supply, but might be the only way to eradicate hunger.

This probably comes as a surprise. After all, organic farmers scorn the pesticides, synthetic fertilizers, and other tools that have become synonymous with high-yield agriculture. Instead, organic farmers depend on raising animals for manure, growing beans, clover, or other nitrogen-fixing legumes, or making compost and other sources of fertilizer that cannot be manufactured in a chemical plant but are instead grown-which consumes land, water, and other resources. (In contrast, producing synthetic fertilizers consumes massive amounts of petroleum.) Since organic farmers can’t use synthetic pesticides, one can imagine that their fields suffer from a scourge of crop-munching bugs, fruit-rotting blights, and plant-choking weeds. And because organic farmers depend on rotating crops to help control pest problems, the same field won’t grow corn or wheat or some other staple as often.

As a result, the argument goes, a world dependent on organic farming would have to farm more land than it does today-even if it meant less pollution, fewer abused farm animals, and fewer carcinogenic residues on our vegetables. “We aren’t going to feed 6 billion people with organic fertilizer,” said Nobel Prize-winning plant breeder Norman Borlaug at a 2002 conference. “If we tried to do it, we would level most of our forest and many of those lands would be productive only for a short period of time.” Cambridge chemist John Emsley put it more bluntly: “The greatest catastrophe that the human race could face this century is not global warming but a global conversion to ‘organic farming’-an estimated 2 billion people would perish.”

In recent years, organic farming has attracted new scrutiny, not just from critics who fear that a large-scale shift in its direction would cause billions to starve, but also from farmers and development agencies who actually suspect that such a shift could better satisfy hungry populations. Unfortunately, no one had ever systematically analyzed whether in fact a widespread shift to organic farming would run up against a shortage of nutrients and a lack of yields-until recently. The results are striking.] click here to read the entire articleà read more….

I found this article to be as well balanced a summary as any I found along my journey today.  I find their citations relating to developing countries quite interesting, and at first glance, probably right on target.  My personal bias is to not have one.  Some call that a cop out, but I call it common sense.  What I am by far most impressed with in this discussion is that people actually care enough to learn where their food comes from .. something I’ve  rarely witnessed in my 30 years of working with agribusiness, farmers, researchers, extension folks, and consumers…and to me, is refreshing.

Over the course of my career, being formally schooled at the University of Kentucky, and trained by Cornell University Extension Specialists and others that know a whole lot more than I do; we were drilled in the concept of ‘Integrated Crop Management’.  The idea is to incorporate all of it..to understand the ecology, the economy, the soil, and the man (or woman) working the land.  The advancements of agri-chemicals and plant genetics are astounding to me.  They are only but one more tool in the belt however.  Each new technology and finding, no matter where it comes from, should be used if and when it fits, and use as little of it as possible to maintain your natural resources and stay in business.  Many of those entering or transitioning to Organic Agriculture are spending millions of unnecessary dollars on unproven products because they are packaged well or make claims that are tasty, but in fact, just not repeatable.  By going back to the basics, many of these same farmers would understand some of the building blocks of crop production, and hesitate just a bit to ask “do I really need it?”..just like the farmers before them have done for generations.

By integrating all that we know, we will make the best decision.  If we don’t need fertilizer or can get just as economically profitable a yield without it..why use it?  If we can control a pest, whether a weed or insect, at half the rate as prescribed but using a different type or timing, why not do it?

“Can organic farming feed the world?” is probably not even the right question, since feeding the world depends more on politics and economics than any technological innovations.

“‘Can organic farming feed the world’ is indeed a bogus question,” says Gene Kahn, a long-time organic farmer who founded Cascadian Farms organic foods and is now vice president of sustainable development for General Mills. “The real question is, can we feed the world? Period. Can we fix the disparities in human nutrition? the marginal difference in today’s organic yields and the yields of conventional agriculture wouldn’t matter if food surpluses were redistributed” -Kahn states in the article of the World Watch Institute.

In closing, I believe that those entering Agriculture, no matter what their political or market position they might hold, need more back to the basics education…more ‘Plant Science 101” and “Integrated Crop Management”.

Somewhere down the road, the extremes will inevitably meet in the middle, where the rest of the world lives, and we’ll all be the better for it.