Understanding Pesticides and their Fate in the Environment

Juan Aldaz2017-05-05T10:55:15-04:00
Uncategorized Comments Off on Understanding Pesticides and their Fate in the Environment

Pesticides have gotten their fair share of abuse over the years. Some of it justified, some of it hogwash.  In these days of social media and ‘fake news’, whomever can make the biggest splash for Search Engine Optimization (SEO) and unique hits to a webpage or a video, wins.  Right?..uhm..not so much.

The bottom line with Plant Protection using pesticides lies in risk: benefit.  The risk being economics, effectiveness, the persistence of the chemical in the environment, and the hazard to the person applying it.  The reward being maximum economic yield (keeping your food cost down), higher quality food (reduced bacteria and fungi; and higher nutritional value because the plant is healthier and its yield of food greater), and product freshness.

Farmers have come a long way to integrate pest management (IPM). Know your crops (all of them), scout your crops (and fields), respond to pest pressure when it reaches economic threshold using all the methods at your disposal.  These include cultural practices like rotation and tillage, cover crops, cultivation, harvest timing, knowing the pest and its life cycle, and more… before you ever reach for the ‘bottle’.

What is a Pesticide Exactly?

Pesticides include Insecticides, Herbicides, Fungicides, and Rodenticides.  Each has their own regimes for timing according to the pest they control.

What is the environmental fate of a Pesticide after it is applied?

Upon application, one or more of several possible fates occur to pesticides.  These relate to its mode of action, as well as its resulting impact on the environment.

Absorption is the process of certain pesticides being taken up by the roots, or absorbed in the leaves, and moved through the plant tissue.  In soil active herbicides, the plant or germinating seed removes the pesticide from the soil solution, it is translocated through the target, and either kills it, or doesn’t.

Adsorption occurs when the pesticide molecule is bound to the soil particle, organic matter, or other substance, and ‘sticks’ to it through chemical or physical bonding.  For example, paraquat, a contact herbicide once commonly used to burn down existing biomass prior to no-till or other reason, binds so tightly to the clay molecules in the soil, it would never enter the soil solution. Hence its only mode of action is contact with live, above ground tissue.  Other factors that relate to how well a chemical is bound to the soil relate to pH, texture, and organic matter.  When bound to the soil, chances are the pesticide is not likely going to enter the environment.  Clay and organic matter tend to tie up materials in the soil because of their negative charge.  The only way pesticide molecules will move is if the soil they are bound to moves (erosion, runoff).  In time, microbes in the soil will degrade the pesticide through digestion and respiration, further keeping it out of the environment.

Solubility of a pesticide is an important consideration, not only from the environmental implications, but from a mode of action standpoint.  Highly soluble materials are good when you have the target actively taking up the material.  However, highly soluble materials are more subject to leaching when heavy rains occur, taking them out of the germination zone and rendering them ineffective while also moving them into the subsurface water and eventually, the aquifer.  On the other side of the coin, materials that are relatively insoluble may persist for a longer time in the soil, even for seasons and years at a time.  For example, Atrazine in corn, when used at high rates, will adversely affect or even kill a crop of alfalfa planted the following year.

Degradation of pesticides begins almost immediately after application.  This occurs through respiration, digestion, uptake and conversion, or other means by both the plants and the microbes in the soil.  The rate of degradation is important when considering the fate of pesticides in the soil environment.  It is from this measure, plus solubility, plus adsorption, plus absorption, that the persistence of a chemical is important.  A material that is short lived in the soil is also short lived in its window of efficacy on the target, but renders itself to less toxic forms and compounds at the same time. This persistence is generally categorized as residual activity. If a material has a long residual, it is also more subject to moving offsite by erosion; effecting crops to be planted in the future that are sensitive to it.  A highly soluble material with a long residual has the greatest potential for leaching to ground water.

As new Plant Protection Materials enter the market, they are designed to combine a short persistence in the environment but a high degree of efficacy on the target they are being applied to.  Much of this technology moves from relying heavily on soil active, pre-emergent materials to contact or leaf absorbed materials applied after the weed emerges, or post-emergent materials.  An example is glyphosate (Roundup and others).  Glyphosate is only absorbed by the leaves.  It is highly soluble, but also very positive in charge, so when applied, and it hits the soil, it is tied up so tightly, plants do not take it up through the roots; nor does it move through the soil water to the aquifer. 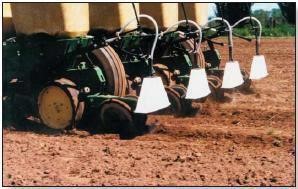 The Future of Chemical Plant Protection

The primary focus points of future technologies in Plant Protection are focused on these primary goals:

As one farmer put it to a group at a meeting I attended once on groundwater in Agriculture, “Hey, don’t forget my wife pulls that water from our well every day!”.

Integrating pest management using all the tools and knowledge available across cultural, economic, AND chemical options will continue to drive the efficient food systems being developed across the world while sustaining our planet for generations to come.

Sources used in this article, and some others that you might find interesting include:

What Happens to Pesticides Released in the Environment? – National Pesticide Information Center